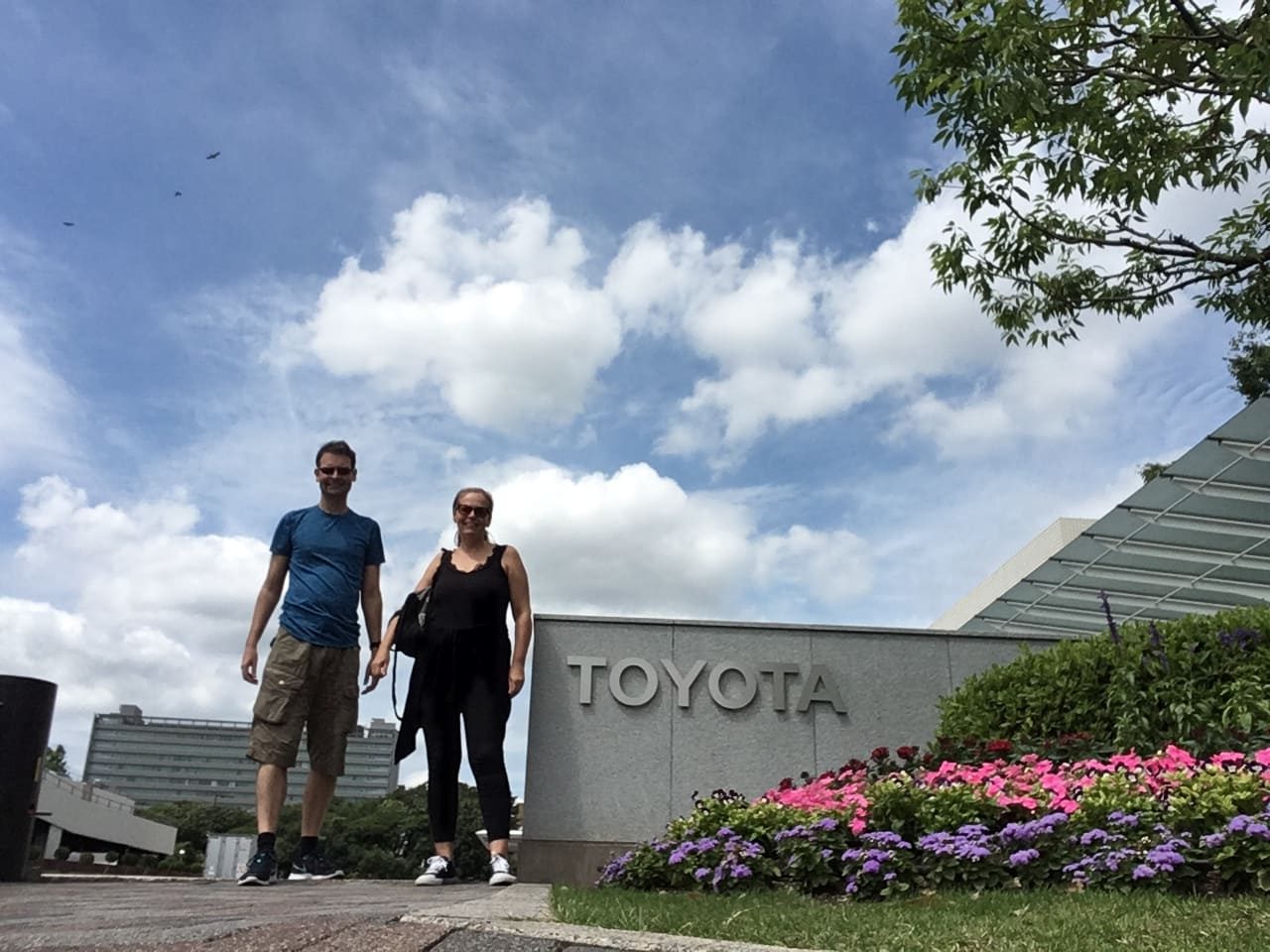 After a busy few days in Japan, visiting companies and talking to Agile practitioners for our Agile Around The World study, we took a break to do some tourist activities. We were staying in Nagoya, capital of Japan’s Aichi Prefecture. We could have decided to go to Nagoya castle. We could have gone to Higashiyama Zoo and Botanical Gardens. Or we could have strolled around the historical area of Ōsu, sampling traditional Japanese food and browsing the shops. Instead we took a train out of Nagoya to Toyota City to visit the Toyota Kaikan Museum and join one of the plant tours.

At the museum, both myself and Glaudia saw our dream cars. For me the Lexus LFA stood out, made mainly from carbon fibre and with 560bhp and a 4.8-litre V10 engine, it is also the car most coveted by Jeremy Clarkson who once said “If someone were to offer me the choice of any car that had ever been made ever, I would like a dark blue Lexus LFA.” 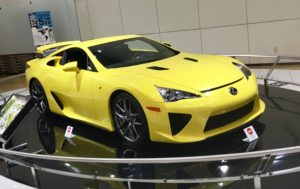 For Glaudia, well she liked the fluffy ‘doggie’ car. 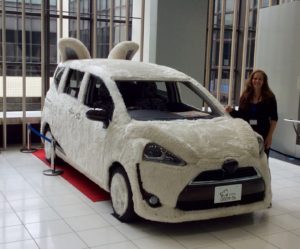 While these and the other exhibits that included the Toyota Gazoo Racing program, the work Toyota are doing on autonomous cars, and the display showing the inner workings of a Toyota Hybris were all of interest, what we were really there for was to see the famed Toyota Production System first hand. We were taken by bus to the Tokaoka plant which makes the RAV4, Auris and Harrier (a model only sold in Japan). On the journey we were told about the twin pillars of TPS, ‘Just-in-time’ and ‘Jidoka’. We were also told to look out for the signs displaying the company motto around the factory, which translates as ‘good thinking, good products’.

From a high steel walkway, we looked down on the long production line, starting at the point where the first fittings are made to the shell of the car. We saw the use of Kanban cards, sheets of paper several times bigger than a post-it note, with all kinds of instructions laid out in a standardised table on the card. Several Kanban cards were attached to the shell of the body of the car, one for each assembly station, and we were told they convey information that included the model (the production line will have different models and specifications coming through, depending on orders to be fulfilled) and the intended market of the car so that the workers know to apply any context specific configurations needed. I liked that the cards were information radiators and not merely instructions, trusting assembly workers knowledge and expertise. As the work is done, the Kanban cards are taken off of the car and put to one side. They are then collected regularly and taken away to trigger the restocking of parts – the ordering done ‘just in time’ to eliminate the waste of over–stocking.

Alongside each assembly station was an overhead chord, the ‘Call Switch’ which workers could pull to signal a problem. We saw the ‘Andon Board’, each station represented by a row with a colour giving the status. Everything was green. Should a Call Switch be pulled, the corresponding row on the Andon Board would turn amber, notifying everyone that there was an issue. The station’s team leader would discuss the concern with the team member and try and resolve it immediately. If they can resolve the issue then the line continues without a stoppage. Our tour guide pointed out the yellow marks on the conveyor belt. Should the Call Switch have been pulled and the issue unresolved by the time the yellow mark reaches another mark at the side of the belt – which indicates the start of the next assembly station – the row on the Andon Board turns red and the whole production line is stopped and remains so until the issue is resolved. This is part of the principle of ‘Poka-yoke’, a Japanese term for any mechanism that helps someone avoid (yokeru) mistakes (poka), to eliminate product defects by drawing attention to errors as they occur.

Assembly teams are 5–7 people, plus a team leader and a group leader (group leaders have more authority than team leaders). Teams are rotated around work stations several times per day to spread knowledge and so workers do not lose concentration doing the same thing all day. Two shifts run for 9 hours with a 45 minute lunch break and a 10 minute break every hour. If someone is losing concentration or needs a rest break, they can pull the Call Switch and the team leader can step in. A nice touch was that people could wear whatever they wanted, as long as they didn’t have accessories such as belts that could get caught up in any of the machinery. This was refreshing after being in Tokyo where, almost without exception, we were surrounded by the white shirts and black or navy blue trousers or skirts of the city’s office workers.

Decades after the TPS was first thought up, continuous improvement is still at the heart of what Toyota do, and everyone is encouraged to share ideas of how to eliminate waste or work more efficiently. Improvement opportunities seem limitless with every detail, no matter how small, open for analysis and improvement. We could see at each station, trays containing parts laid out in well thought through configurations. We were shown one idea that was adopted where a worker needed to pick up 5 bolts for a task, but complained when he reached into the tray of bolts and would not always grab the 5 bolts required. To demonstrate the problem, a tray of bolts was provided for us to try. On my first effort I retrieved 3 bolts. On my second attempt, I got the 5. On my third I had picked up 4. An obvious solution would have been to supply the bolts in trays of 5, but this would have caused waste elsewhere – someone else would have to set the tray up, not to mention the waste in transiting the trays of bolts back and forth to the workstation. The solution was a contraption, a mechanical arm with 5 ‘fingers’ with small magnets on each end. Work the lever and the fingers would dip into the tray of bolts and snap back, dropping excess bolts back into the tray leaving 5 bolts for the worker to pick up, every single time.

I was struck by how relatively quiet it was. In my younger days, I worked in factories to pay my way through my student years. While there was the expected whirr of machinery, what was missing compared to my experience was the sound of human voices, usually loud voices barking orders. We saw robots, small cars like something from Star Wars, dragging huge pallets of parts around the factory floor. We saw robot arms spinning and moving, beavering away packing boxes. They almost had their own personalities. Mechanical rigs did the heavy lifting. It turns out that 90% of the production line is automated. This includes much of the continual inspection, which were other variants of the Call Switch and Andon Board. For example, at the engine assembly area there were traffic light displays showing the status of the emerging engine after the latest checks at each point of the production line. With all workers taking collective responsibility for quality, the pillar of Jidoka – to build quality in and never send defects onto the next process – has meant that Toyota produces an end product that has a defect rate of close to 0% on final inspection.

Some of the other impressive stats were; a ‘cycle time’ of 1 day – the time it takes to build a car, from stamping the body shell to completion, a ‘throughput’ of 1200 vehicles per day, or put another way, 1 car delivered nearly every minute. And these rates have flexibility too, the production rate is based on 1 month of real orders, plus a projection for the following 2 months of orders. Flexibility is built into this plan if these projections are inaccurate.

There were so many ideas and practices that demonstrated Agile and Lean principles, principles that we work with in our day jobs with software development teams. Glaudia and I really enjoyed our day off and we went back to work on our Scrum Around The World study with renewed enthusiasm – a good job too if either of us was ever to afford our dream car.