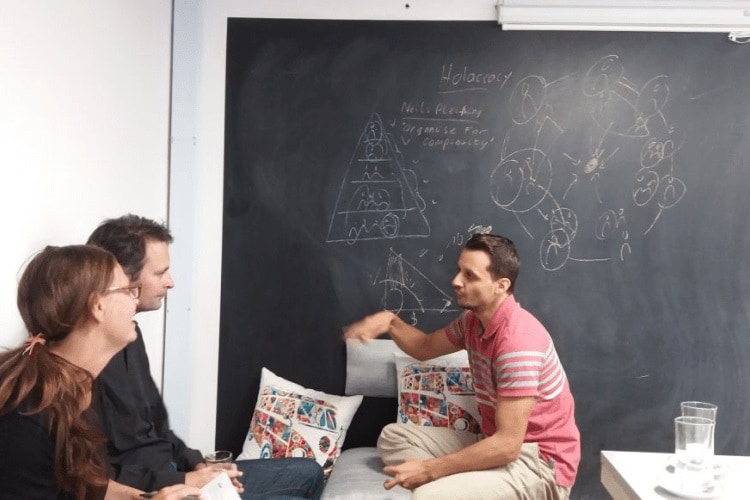 Despite how well known Colombia is for its coffee, we found that it was actually quite hard to find a good cup of the stuff in Bogota. I‘m speculating that one of the reasons for this is that the really good coffee gets exported. Another might be that there are not many well trained baristas in Colombia. I do know that in Italy for example, coffee is made with lukewarm water rather than water at boiling point so that the flavour is not destroyed by heat, a mistake commonly made across the world.

We discussed the virtues of coffee with Dominic Krimmer and his wife Catalina as he prepared a cup for us, promising us that it would be one of the best cups of coffee in the world, made with high quality local beans and his own specialist knowledge of how to make it just right. I can confirm that Dominic’s confidence was well placed; he knows what he is doing when it comes to making coffee. We found out from our afternoon visit to the offices of Plastinorte in central Bogota that Dominic also knows what he is doing when it comes to transforming an organisation to Agile ways of working. 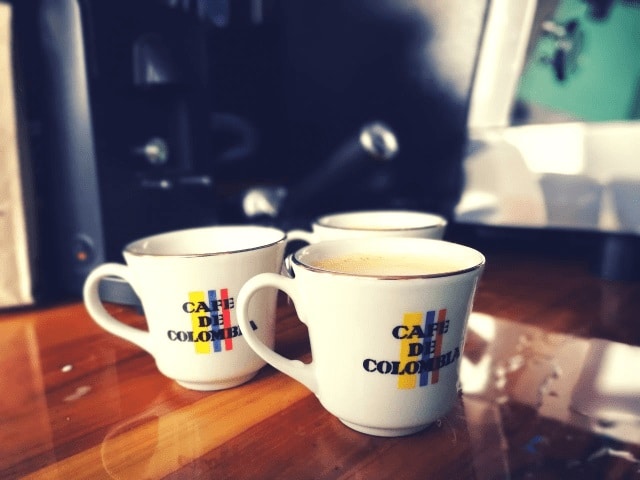 After several years experience in Europe in the software industry, first as a developer and then as a Scrum Master, in 2016 Dominic was offered a challenge by his father-in-law to come to Colombia and continue the family business. Plastinorte S.A.S is a company selling hardware materials such as upholstery, flooring and mattresses to name just a few. Even though the industry was quite different to the one of software that Dominic had known, he soon came to see the potential of Plastinorte and accepted the challenge together with his wife Catalina.

When Dominic first arrived at Plastinorte, he took the time to really understand the business, chatting to everyone no matter what their role was. He saw that his father-in-law had done an excellent job of building up the business, but he also saw that it would need to adapt to the new world of digital, and to a knowledge based economy. Inspired by Jason Little and ideas from Lean Change Management, Dominic, together with Catalina and the team at Plastinorte evolved the business. One of their foundations was to build upon open source software that Dominic encourages the wider community to get involved with, not for commercial gain, but to encourage feedback and to make the products even better. The result; Plastinorte have a system that lets them see reports and figures on everything from accounting and inventory to payroll and much more. Catalina’s father had a dream of being able to pick up his phone and see what was happening in the business. Now the dream was real. The technology had taken them from a place where they did not know their own data, to one where it was available in real time and from anywhere.

In parallel with the technology, Dominic and Catalina are working to bring the people closer together for the good of the business. It is a big task as the company has about 70 employees and 13 branches. Dominic faced cultural differences, the Colombian staff were not used to his polite but direct European style. But Dominic does not want to be the boss, instead he wants to empower, including the store managers of the branches, encouraging them to own the direction but, and here is the key thing, to collaborate together for the wider good of the business and not just their own store, using the now visible data to support decision making. For example, where one store has a product that is selling well at a good price, another store manager who has unsold stock of the same item should now help with the supply of the item to the other store. Dominic told us that he believes “technology creates visibility”, and this is just one example where it is making a difference to Plastinorte. Their journey continues, but as a result of the work over the last two years, Plastinorte is now the number one company of it’s kind in Colombia, way ahead of the competition.

Catalina’s father had created the company with a desire to provide stability and security for the employees and their families. Dominic and Catalina want to continue the story, giving people stability by growing and developing them and making them adaptable in a world where permanent employment and a job for life is evermore uncertain. Dominic is not interested in qualifications, instead he looks for enthusiastic, adaptable people, keen to learn and who would be a good fit with the rest of the team. He is proud of developing people and is happy if they leave the company to go on to do great things. Above all, he wants to grow the next generation of leaders.

Understanding that improvement never stops, Dominic spoke passionately about other ideas he had, discussing with us how the traditional Tayloristic hierarchical management structure is no longer fit for purpose. He offered us an alternative, drawing us a structure more like a multi-celled organism not too dissimilar to the ideas discussed in Holacracy and by Niels Plaegling, despite not being aware of them. Dominic saw a future where the store managers could work as a kind of distributed Product Owner group, and drive the strategy of the business from the ground. Great minds do seem to think alike. And know how to make great coffee.